THE BBQ ACTIVISTS
By Samantha Pearson

Valder Bastos is an unlikely activist. Tottering around his apartment in platform heels and a corset, he spends the first 10 minutes of our interview in pursuit of his disobedient Yorkshire terrier. But Bastos, or Tchaka as the 42-year-old drag queen is known to his fans, is one of the more militant demonstrators behind a recent wave of “barbecue protests” across Brazil.The country’s somewhat laid-back answer to the Arab spring works like this: invite your friends on Facebook to a mass barbecue in a public place to protest against a specified injustice. Then wait for it to go viral. The result is somewhere between a flash mob and carnival – the perfect cordial protest for a nation with an inbuilt aversion to confrontation and an obsession with Facebook.

“I’m a big activist but I only get involved in truly noble causes,” Bastos explains at his home in São Paulo’s red-light district, which he shares with his mother.

After a rather humdrum start to life – he was born in the hydroelectric plant where his father worked, and later trained to be a lawyer – Bastos now divides his time between guest appearances at hen parties and public demonstrations.

Brazil’s first major barbecue protest, he recalls, started off as a joke in May 2011. São Paulo’s governor had cancelled plans to build a metro station in the upmarket neighbourhood of Higienópolis after residents complained it would bring undesirables or “gente diferenciada” (different people) to the area.

As a retaliatory quip, a local journalist created an event on Facebook for a Churrascão da gente diferenciada (Big barbecue for the different people) outside Higienópolis’s shopping centre the following Saturday. But almost 1,000 people took the invitation literally, turning up at the specified time for a protest-cum-street-party in the name of egalitarianism and better public transport.

The makeshift barbecues set up on the tarmac by some demonstrators were not just for fun, but became a symbol of solidarity, explains Bastos. In what is still one of world’s most unequal societies, a love of charred meat is one thing Brazil’s billionaires and slum-dwellers all have in common. “Barbecues make Brazil more democratic, a bit like the beach in Rio – it’s for everyone,” he says.

It was a strange turn of events, particularly for Brazil. After more than three centuries of colonial rule followed by intermittent dictatorships, Brazilians generally shy away from confrontation. Strikes over wages are common among the country’s powerful unions but spontaneous protests over such lofty ideals as equality are almost unheard of. “The Brazilian population was always intimidated and this fear of confrontation meant that repression became second nature,” says Dennis de Oliveira at Brazil’s USP university.

Even now, after nearly 30 years of civilian rule, Brazilians still invariably opt for negotiation over conflict. Some put it down to the stereotypical cordiality of the Latino spirit. Others point to widespread corruption and inefficient bureaucracy, encouraging people to get what they want through sneaky subversion rather than by “taking on the system”. Violence in the big cities also means generations of Brazilians are still brought up not to confront others – whether it be a robber or someone cutting in a supermarket queue. “Just do what they want and keep quiet,” coo mothers nationwide. 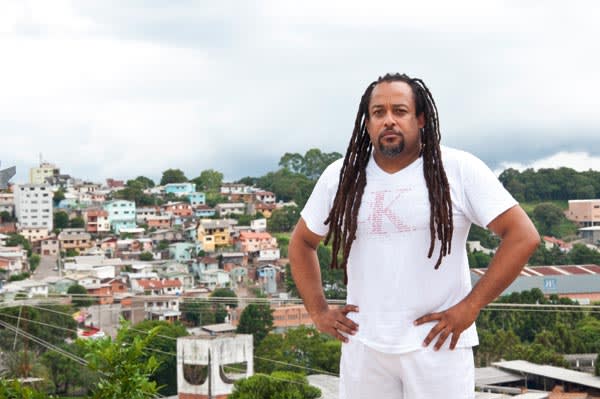 But the Churrascão da gente diferenciada turned out to be just the beginning. In January last year, more than 200 Facebook users armed with sausages ventured into “Cracolândia” (Crack Land) – a central region of São Paulo long dominated by crack cocaine addicts. While glassy-eyed locals wolfed down the free food, protesters paraded banners calling for an end to police aggression in the area.

Then in November came the Churrascão democrático com a Anna Cintra! (Big democratic barbecue with Anna Cintra) – a student rally to appeal the undemocratic election of Cintra, the rector of São Paulo’s Catholic university. 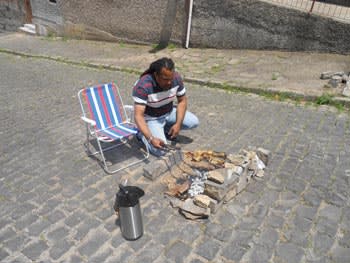 Barbecue protests have also sprung up across the rest of Brazil. In the southern cowboy state of Rio Grande do Sul, a member of the Brazilian Communist party, a Rastafarian known as Jamaica, held a barbecue to get a pothole in front of his house fixed. After several unsuccessful calls to the local council, Jamaica sat down next to the hole last November, poured in some coals and began to roast a beef steak. Accompanied by a bottle of red wine, Jamaica sat there for four hours until the local press turned up. “I was also thinking about filling the hole with fish and bringing my rod,” he says.

Football supporters about 2,000km north in the state of Mato Grosso also organised a barbecue protest last July to demand more investment in local clubs, as well as the outstanding payment of some players’ salaries. The same month, an association of pig breeders grilled some pork in front of the Ministry of Agriculture in Brasília to demand subsidies for the industry.

Back in São Paulo in the upper-middle-class neighbourhood of Vila Mariana, film producer Daniel Ribeiro explains how he organised the most recent barbecue protest in December – the Churrascão das cabras (Big goat barbecue). The inspiration came from a controversial editorial in the local magazine Veja, arguing that men had as much right to marry other men as they did to marry goats. 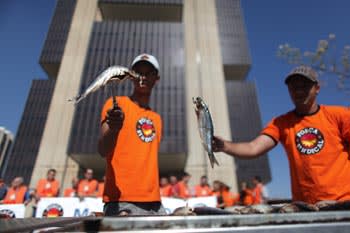 Three weeks later, a gay law student was beaten up in São Paulo – the latest in a series of homophobic attacks that Ribeiro puts down to the country’s growing evangelical movement. “We knew we had to do something,” explains 30-year-old Ribeiro, taking a quick break from his latest film – a surprisingly light-hearted tale about a blind boy who discovers he is gay. But this time the protest did not actually involve a barbecue, Ribeiro confesses. “The churrascão became a brand … it was just a good way to promote the event.” 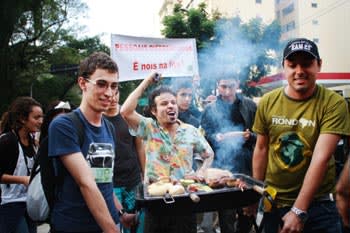 The popularity of the barbecue movement also owes itself to the phenomenal growth of Facebook itself. From grandmothers to drug lords, about 1.8m people per month have joined Facebook in Brazil in the past two and a half years. The country now has the world’s second-biggest Facebook community after the US – of the 90m internet users of a population of nearly 200m, 61m are now on “Face”, as Brazilians like to call it.

For centuries, Brazilian society and business have relied on personal connections and recommendations so it is no surprise that social media “fits Brazil like a glove”, says Paula Chimenti at Rio de Janeiro’s Federal University. But while this emphasis on personal relationships bred a culture of oligarchy in the past, social networks promise to have the opposite effect by challenging the country’s monopolistic media and fostering activism. Alexandre Hohagen, Facebook’s Latin America head, proudly cites examples such as Isadora Faber (see “25 Brazilians to watch”). Last year the 13-year-old started posting daily accounts of her school’s wrongdoings and, to her teachers’ dismay, now has more than half-a-million “Likes”.

But some are more sceptical about the future of Brazil’s online activism. While social media protests have helped topple governments across the Arab world, Brazil’s barbecues have so far proved largely fruitless: Higienópolis’s metro station will be built somewhere else; Anna Cintra is already rector; Mato Grosso’s football teams are still broke; and the police are no friendlier to crack addicts.

The only true success story so far has been Jamaica – the council came to fill in the hole the following day.

Humorous protests, along with barbecues and the occasional drag queen, may be the only way to get the average affable Brazilian out on to the street, but they do not necessarily get results, says Ribeiro. “Humour can be a powerful tool, but it can also be just another way to hide from confrontation,” he explains.

Alfredo Behrens at São Paulo’s FIA business school agrees. “It is hard to build a better society this way,” he says. “Brazil’s cordiality is a form of self-preservation but it does not have much of a future.”